Shelton Sampson Jr. had no lofty expectations as a freshman. Tate intervened.

“One of our starting receivers went down with an injury,” Sampson said. “I started in his place and that was when it got real … I was on the varsity. I did not expect it … it just happened.”

Expectations have been on the rise ever since for the Catholic High senior, who is set to announce his college commitment at 3:06 p.m. Saturday at the school.

LSU, Alabama, Florida State and Texas A&M are the finalists to land Sampson, Louisiana’s No. 3 prospect in the class of 2023, according to a 247sports. Sampson also is one of the nation’s top five wide receiver prospects by multiple services.

There is plenty of hype surrounding the 6-foot-4, 190-pound Sampson, including a series of videos addressing the fan bases his finalists … a bit of a contrast to Sampson’s low-key demeanor. There is also more to his story.

• He played basketball, baseball and football growing up and was a quarterback until he was an eighth grader.

• His father, Shelton Sampson Sr., was a star running back who helped usher in an era of dominance at Redemptorist and then starred at Northwestern State.

“He (Shelton Sr.) was my coach through seventh grade. He taught me how to catch touchdowns, to be a good teammate … everything really. He always stayed on me. He never let me slack up.”

Asked about seeing film of his father, Sampson smiled and said “I’ve seen a couple of highlights … I guess he was as good as everybody said he was.”

• Sampson is a family and team guy. He hangs out with his two younger siblings. He has a “LaToya” tattoo to honor his mother.

Sampson says committing will shift focus right where he wants it  to the 2022 football season. He sums up the meaning of Saturday’s commitment in three words, “A big relief.”

“Recruiting is a priority … sure, but the (Catholic) team is the big priority,” he said. “It has been important for me to not get so wrapped up in recruiting that my focus was not there for my team.”

As a junior, Sampson had 40 catches for 932 yards and eight touchdowns to help the Bears win the LHSAA’s Division I title. He eagerly lauds the talents of the Bears’ receiving corps that also includes Daniel Harden, Brooks Babin and Bradley Wright.

A leadership role is new. Catholic wide receivers coach Brad Nelson says it is part of the next progression for Sampson.

“He has elite ball skills and is a guy who can go up and get it. He’s so humble. He doesn’t like all the attention with people calling and texting,” Nelson said. “We’ve talked about dynamic plays once he gets the ball in his hands. We want him to take it to the house. Along with  work on his blocking and being a more physical receiver.

“With him getting so much attention people are going to gravitate toward him. He has not been that vocal and is the kind of guy who leads by example. But when he speaks, people will tend to listen. We are working on that.”

Junior quarterback Daniel Beale and Sampson are heading into their third season together. They have developed chemistry and a bond.

“He (Sampson) doesn’t talk that much until you get to know him,” Beale noted. “He is a real cool dude.” 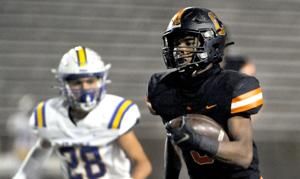 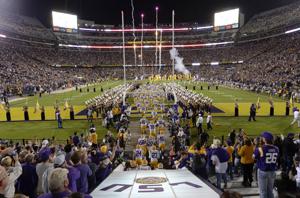 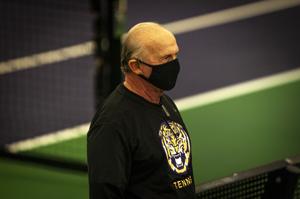 Column: Why this men’s tennis season was the best of the Brandi era, and the disappointing reality regarding LSU’s future
About Marc Lemoine 276 Articles
Marc is an Economist and a well experienced weightlifter who has won many championships. He intends to build a bright career in the media industry as well. He is a sports freak who loves to cover the latest news on sports, finance and economy.